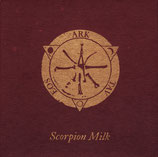 Scorpion Milkby Arktau Eos, a work that was originally released in June 2006 is re-released through Aural Hypnox's Stellar Mansion series.

'Scorpion Milk' consists of a single album length track, which is best apprehended in a meditative state with minimum outside interference. It is a shadowy companion of the 'Mirrorion' album, the candle-bearer who responds to no call but silence itself. The music can be likened to a dark well, the oily surface of which not only reflects the phantasms of mind recalled through participation in the "Mirrorion" cycle, but is occasionally broken by scorpionic surges of primal Power invigorating the act of contemplation.

Performed and mixed live by using mainly obscure electronica on a reel tape, it is the antithesis of the sterile, lifeless sound and attitude of our times; a connoisseur's choice that stands alone despite its undercurrents flowing from the heart of 'Mirrorion'.

The album is enclosed inside a newly designed cardboard covers including a 8-panel booklet and a silk-screen printed insert card. Limited to 500 copies. 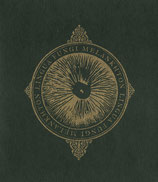 Melankhton is a sonic interpretation of particular illness narratives and a study in experimental anthropology based on fieldwork material gathered especially for this project. The narratives and sounds expressing them reflect the shifting states of the turbulent minds visited by Melankhton.

The album presents contemplative forest music in its purest form - a return of lost, primeval forest hymns. Buried deep in sound and soil, primal Mana has been unearthed and unleashed from the remote frosty hummocks and calm fells all over boreal forests. The circling polar flares in the night sky and a variety of forgotten calls guide the indefatigable explorer inwards, towards the saffron

CCW consists of five tracks utilizing only acoustic instrumentation, which for the most part have been recorded live in the Katajan Kaiku studio with no overdubs.

Regular edition of 444 copies is enclosed inside hand finished cardboard covers including a 8-panel booklet.